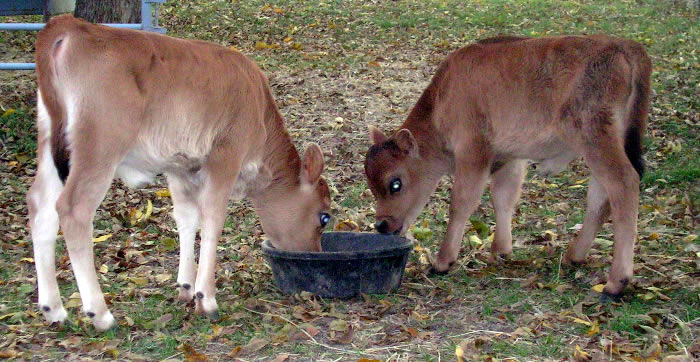 Today, Dinah and Dancer were moved from the pasture they shared with their dams to the smaller heifer paddock where they will be bottle and grain fed.  Recent studies have shown that proper rumen development is maximized when grain is introduced into the calves’ diet at a young age.  It was once considered to be adequate to just leave the heifer on the cow and allow her to graze with her dam, developing her rumen slowly as she matured.  However, new research shows that grain introduced early is much more efficient at rumen development than grass and/or hay.

Since our cows produce such nice, yummy, rich milk, it’s really difficult to get the calves to eat much grain at all if they remain with their dams.  Because of this, we separate them so that we can reduce their milk consumption and encourage grain consumption.  From today and until they are weaned, they will get milk and a specialized grain based feed with a small amount of the very best hay.  After weaning, they will continue to eat grain as their primary source of protein and nutrients, but will begin eating more hay.  If it’s spring when we wean the calves, then the hay is eliminated and they graze good pasture.

The concept of feeding grain early in heifer development, is that grain stimulates production of the various bacteria needed in the rumen to process the foods that they will eat throughout their lives.  When a calf is born, their rumen is very small and not developed.  This is because milk does not pass through the rumen, but bypasses it via the esophageal groove and goes directly into the abomasum (the cow equivalent of the human stomach).  As solid foods, particularly grain, are introduced into the diet, the esophageal groove eventually closes and all food passes through the rumen.

It’s hard on the dams and heifers today as they are separated for the first time.  Although we keep them in adjoining pastures, they will moo and cry for a couple of days before they settle into their new routines.  But to produce an exceptionally healthy heifer is worth it all.