People are always asking me if Miniature Jersey bulls are mean or aggressive.  It’s common knowledge that Jersey bulls have a bad reputation, but we have not seen this in our bulls – quite the contrary.  Bull calves are very playful, but they can also be extremely sweet, sometimes even more so than their female 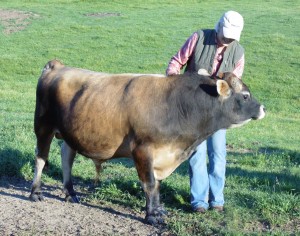 counterparts.   Generally our bull calves tend to be quieter and less spooky than the “girls”.

One of the things that we do to help keep bull calves gentle, is that we bottle feed them right from birth so that they are bonded to us.    In addition as we train them to lead and be handled, we take care to let them know that they are not in charge – we make sure that they don’t come to think that they are our masters and not the other way around.  If you watch a herd of cattle with their young calves, you’ll see the mama cows occasionally ram their babies, or kick them a little – this is just nature’s way of letting the calf know that they’ve pushed just a little too hard on their dam and need to back off some.  It’s all about socializing the young to their environment.  In a herd the calves learn about herd dynamics, dominance and leadership from their dams, just as they must learn proper conduct in relationship with humans.

When our bull calves are very young we handle them often every day; but once the calf reaches puberty (often 6-7 months for a mini Jersey bull) we don’t “mess” with them so much.  We continue to catch our bulls calves every day and brush them or lead them from pasture to night paddock, but we don’t just go out to pet them for long periods of time.  There is a reason for this:  bulls continue to be playful for life and if you’re just out hanging around in the pasture with your bull he’ll find something “fun” to do with you – and usually what my bull thinks is fun, I don’t much like!  Watch your bull in a pasture with other cows.  He’ll jump on them, ram them, and generally make a nuisance of himself…you do not want him treating you that way.  So, after a bull is mature, handle him when you need to, but otherwise leave him alone.

When dealing with animals there are always exceptions on both sides of the issue – there are many aggressive bulls, but there are also some very gentle ones (like our D C Ebenezer who will stand quietly to be brushed for as long as you are willing to do it).    Always take care when you are around any bull to make sure you recognize any aggressive behavior immediately, and do not let it escalate into a problem.  If you are not comfortable owning a bull you can always AI (artificially inseminate) your cows and avoid owning one altogether.   Above all, be careful, and be safe when around any large animal.